The remains of a maritime museum security guard are found in the Florida Everglades after an attempt to steal an obsolete 17th century nautical chart fragment used to find treasures. In order to solve the crime, Booth seeks out Walter Sherman, a former Iraqi soldier with an uncanny gift to unearth anyone and anything. With Sherman’s help, as well as that of his colleague, Ike Latulippe, and his legal advisor, Leo Knox, the team is led to tattoo artist who points them in the direction of a tough young woman. But when the woman is found murdered with remnants of the map lodged in her remains, the team discovers centuries of history linked to the map and the suspect behind the crimes. Meanwhile, Brennan puts Sherman’s remarkable skill to the test, and Booth harbors cold feelings toward his former military comrade. 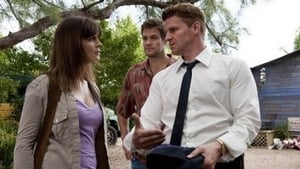