The Mystery in the Meat

The Jeffersonian team investigates the murder of a food scientist whose remains were tossed in a meat grinder and mixed into cans of stew served in a school cafeteria. When the team uncovers the scientist’s newest – and highly lucrative – food invention, they also track the trail of jealous competitors in the multi-million dollar food industry. Meanwhile, Angela plans a post-wedding bachelorette party for Brennan, which gets crazier than intended. 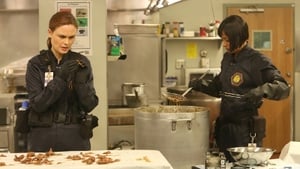