The Jeffersonian team investigates the murder of Jamie Delcampo, a member of the Estrellas Locas gang, whose remains were found in a burnt out car. Meanwhile, having taken time off from the FBI in the wake of Pelant’s latest assault on the team, Sweets ultimately decides to help with the investigation when he discovers that a young boy from the center where he volunteers is the son of one of the gang members. 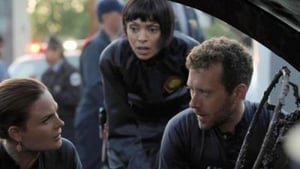