The One With The Giant Poking Device

When Chandler is about to buy Janice an expensive gift, Joey tells him that he saw Janice kissing her ex-husband. Chandler confronts Janice and she admits that she is confused about what she should do and can’t chose between the two men. After much soul-searching and some advice from Joey, Chandler realizes he has to let her go back and try to make things work with her husband. While Rachel is babysitting Ben, Monica accidentally bumps his head into a post. The girls attempt to hide the bump under a hat but Ben keeps saying “Monica bang.” When Ross finds the bump, he assumes that it was Rachel’s fault, but she rats out Monica. Ross then gets to torture her by pretending Ben is seriously injured. Phoebe is convinced that she is cursed because every time she goes to the dentist, someone around her dies. After she is forced to go to the dentist, she calls everyone she knows and they are all alive. Ugly Naked Guy, however, has been lying in the same position without moving all day. The friends tie together a bunch of chopsticks into a giant poking device that they use to prod Ugly Naked Guy. He turns out to be alive and not very happy about being poked. 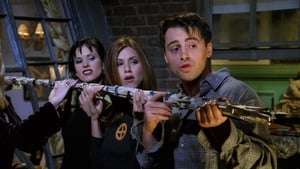 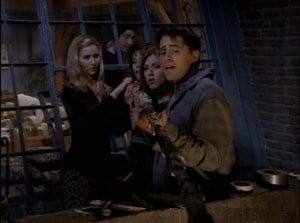