The One with the Worst Best Man Ever

Phoebe is tired of being pregnant and experiencing major mood swings. Ross chooses Joey as his best man. The girls decide to throw Phoebe a baby shower after they’re not invited to the bachelor party. Joey orders strippers after Ross says not to. Monica and Rachel get Phoebe presents that she can use after her pregnancy because she can’t keep the babies. Chandler tries to draw attention away from Joey at the bachelor party. Joey sleeps with the stripper and awakes to find Emily’s ring missing and the stripper gone. The guys set up a sting to get the ring back. Phoebe experiences false labor. It turns out that the stripper didn’t take the ring but the duck ate it. Ross decides to have two best men. 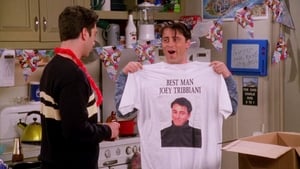