The One with Ross's Wedding (1)

Monica freaks out about the trip to London. Joey annoys Chandler by saying “London, baby” over and over. Ross is annoyed that Rachel won’t come. In London, Chandler is embarrassed about touring with Joey. Emily worries about the wedding and Ross reassures her. Rachel tries taking care of Phoebe but Phoebe clues her in to her feelings for Ross. Joey buys an ugly hat and Chandler goes back to the hotel. Monica gives Emily advice, so Emily decides to postpone the wedding and she and Ross argue. Phoebe tries to help Rachel get over Ross. Joey shows Chandler highlights of his trip on video camera, including his meeting with the Duchess of York. Ross confronts Monica, who agrees to help him. Ross and Emily make up and decide to go ahead as planned. Rachel decides to go to London and Phoebe tries to talk her out of it. 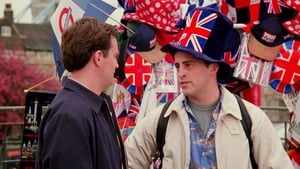