Hawkeye is outraged when a sensationalistic war correspondent, Clayton Kibbee, reports irresponsible G.I. stunts as tales of military valor. Kibbee: “As for the last two pints of blood, there’s no big finale, no heroes. They helped an old soldier, who’d had visions of glory but finally got it through his thick head how tragic and inhumane war can be. Maybe he’ll know better next time.” 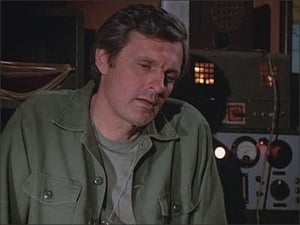