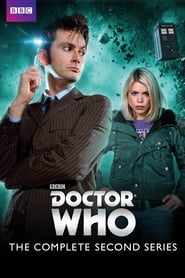 Doctor Who TV Series | Where to Watch?: Season 2

This is the first series to feature David Tennant as the tenth Doctor. He continues to travel with his companion Rose Tyler (Billie Piper), with whom he has grown increasingly attached. They also briefly travel with Rose’s boyfriend Mickey Smith (Noel Clarke), and Camille Coduri reprises her role as Rose’s mother Jackie. The series is connected by a loose story arc consisting of the recurring word “Torchwood”. This is also the first series to be preceded by a Christmas special, which was commissioned to see how well the show could do at Christmas. The success of “The Christmas Invasion” led to the Christmas special becoming an annual tradition.