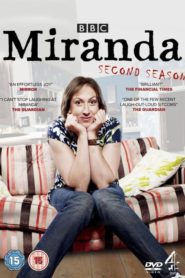 Following the conclusion of the first series, the BBC commissioned a second series for BBC Two in 2010. Of this, Hart said “I am not only relieved but totally overwhelmed by the response and thrilled that people have enjoyed the series. I am very grateful for all the support and to the BBC for giving me the chance to do another series next year.” Filming started during the first weeks of summer, and the new series began broadcast in November 2010. The second series comprises six episodes and saw the return of Miranda’s mother and friends, Stevie, Gary and Tilly