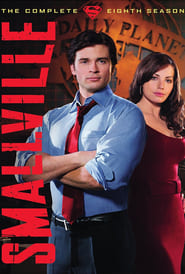 Last season, Clark Kent and Lex Luthor became sworn enemies and Clark discovered more about his home planet, who his parents were, what his future holds and why he was sent to Earth. In season eight, Clark Kent is now reporter at the Daily Planet who shares a workspace with Lois Lane. And there’s a new hero in Metropolis – a hero everyone now calls the Red-Blue Blur.