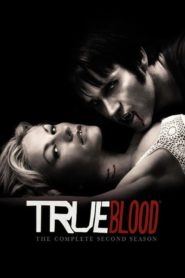 The second season of the television series True Blood commenced airing in the United States on June 14, 2009, concluded on September 13, 2009, and contains 12 episodes. It is loosely based on the second novel of The Southern Vampire Mysteries, Living Dead in Dallas. The second season explores telepath Sookie Stackhouse’s relationship with her vampire lover, Bill Compton. It also introduces a number of sub-plots involving the anti-vampire Fellowship of the Sun church and Jason Stackhouse’s indoctrination into the church by its leaders, Rev Steve Newlin and his wife Sarah. It also expands the role of Maryann Forrester, a powerful supernatural creature, who slowly gains control over the people of Bon Temps. Sookie and Bill travel to Dallas to help Eric find his maker, a two-thousand-year-old vampire named Godric, who has gone missing and is believed to have been kidnapped by the Fellowship of the Sun. The second season aired Sundays at 9:00 PM in the United States. The season finale aired on September 13, 2009.