After being kicked out of her house, Buffy walks alone and breaks into another house to get some sleep. Spike and Andrew return with news about the vineyard, but when Spike finds out what happened he hits Faith and leaves, trying to pick up Buffy’s scent. The First pays Faith a visit in the form of the Mayor, but she isn’t fooled. It tries to unbalance her by saying that Buffy still, and will always think of her only as a killer. Robin finds Faith and the two share a moment, which leads to them having sex. When Spike finds Buffy, they talk about her being rejected. She says that everytime she makes a decision, someone dies and that maybe Faith is best in charge. She tells him to leave, but he refuses, telling her what he knows about the vineyard and that he loves her. She tells him she just wants to be held, so they fall asleep in each other’s arms. The next morning Buffy pays Caleb a visit, prepared for what he throws at her. He tries to hit her time and time again, but is unable to since Buffy uses her superior speed against him. Finally Buffy discovers the item Caleb tried to hide from her. 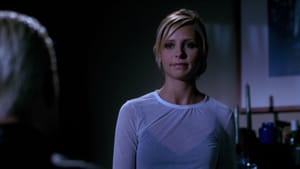 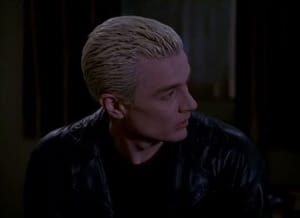