The Twisted Bones in the Melted Truck

Booth and Brennan’s next case leads them to a crime scene where a human carcass has literally melted into the dashboard of a charred truck. As the team investigates the case, they discover a gunshot wound in the victim, but learn that neither the fire nor the bullet was the cause of the victim’s death. Additional clues lead them to a local high school where the victim’s wife is a teacher. As a student-teacher relationship begins to surface and a pattern takes shape in the lab, the team is able to track down the murder weapon and solve the crime. Meanwhile, Sweets resists the temptation of allowing his feelings for Daisy to interfere with helping her pass a government psychological evaluation, and Hannah attempts to break the ice and warm up to Booth’s son Parker. 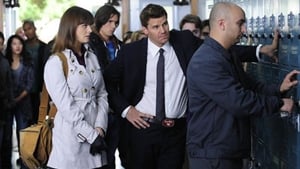