The Land That Time Forgot

Jonah and the bots realize the Mads have been stealing their ideas for Invention Exchanges. The Satellite of Love attracts a giant space squid, and Kinga and Max debut a promotional ad for their new venture, Dinosaur BBQ. Jonah and the bots riff on The Land that Time Forgot.Movie Plot: A small group of survivors is taken in by a German submarine after the vessel has sunk their ship. When a struggle ensues between the German officers and their captives, the U-boat, which is running out of fuel, comes across an uncharted island. Unfortunately for the passengers and crew, dinosaurs and other prehistoric creatures roam the land and everyone must fight to survive. Original film made in 1975. 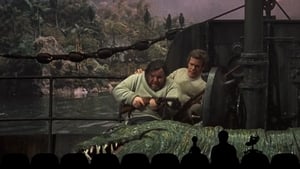